Which is better - the Toniebox or the Tigerbox? - Calculate Now


In the age of digital media, it has always been somewhat difficult to enable children to enjoy digital audio content as well, because conventional MP3 players are often still too difficult for the youngest users to operate. No wonder that resourceful businessmen took advantage of this gap in the market and developed digital audio systems that are specially adapted to the requirements of small users. In this special, we take a look at two of these well-known systems.

The pioneer in the fairly new market of audio boxes developed specifically for children was the Toniebox, which in combination with the so-called Tonies (these are the figures that are placed on the box) bring the respective audio books, music tracks or radio plays into the children's room.

Advantages of the Toniebox

The Toniebox is available in different colors and can be operated intuitively by children as young as 3 years old by pressing, turning and tilting. The box is so robust that it can survive falls, while the figures invite children to play. The price of the Tonieboxes is around €75-80, while the figures (Tonies) usually cost €14.99. The runtime of the integrated battery is 7 hours, and headphones, which are not included, can also be connected. A WLan connection is only necessary once for the use of the Toniebox when using a new Tonie for the first time. Once loaded, the content can be accessed at any time - the figure then only needs to be placed on the box. The child can therefore decide for itself which audio book, audio play or music it would like to listen to at any given time, and can also change them again independently. In addition to the familiar audiobook or radio play figures, which are recorded with the corresponding stories of the featured characters, so-called creative tonies are also available, which can be recorded with their own songs and digital content with a running time of up to 90 minutes, so that existing files can also be reused. Particularly practical: the creative tonies can even be discussed remotely using the app, which can be invaluable especially when a parent is away: This way, mom or dad can speak the bedtime story or a greeting to the Tonie from the road. 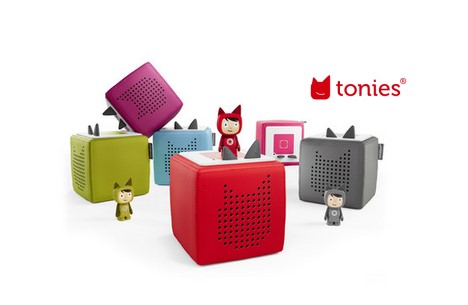 The popularity of the Tonieboxes was particularly evident in recent years in the run-up to Christmas, when the boxes were completely out of stock in many retail stores and also online stores. The advantages of the box are clear: The annoying jumping, disappearing and scratching of conventional CDs is eliminated, the operability of the box is in contrast to other MP3 players conceivably simple and also the robustness forms a big plus point. Furthermore, the variety of available Tonie figures is almost endless, so that the often difficult gift search at Christmas or for birthdays is also easier for relatives and family members - so the Tonie collection can always be expanded and the Tonies can - unlike streamed or purchased digital content for MP3 players - even be resold.

Disadvantages of the Toniebox

If you compare the Toniebox with conventional audio players, the first thing you notice is the rather high purchase price. The Tonies aren't exactly cheap either, and anyone who wants to give their child a decent collection of Tonies can't avoid spending a few euros here and there. Those who have a Spotify subscription, for example, and thus already have access to many good audio plays, may not want to incur these extra costs, but prefer to stream via conventional devices.

Another disadvantage is that the Toniebox is not immediately ready for use, but only works in combination with a Tonie, which must first be recorded with the digital content. It is therefore advisable to carry out this preparation before handing over the gift to the child in order to avoid long faces.

Some users also complain that the track selection can be changed unintentionally by tilting the Toniebox, which could perhaps still lead to difficulties for smaller users.

Of course, the development of the Toniebox did not remain without impact on the market, because other manufacturers also recognized this new source of income for themselves. Since then, other digital audio systems have emerged, some of which have different features. In this article, we will therefore look at the Tigerbox, which has been available on the market since 2017 and has also enjoyed positive growth since then.

Basic information about the Tigerbox

The Tigerbox also comes with a child-friendly and visually appealing exterior. Its noble wooden design, modern different color variants and large control elements also appeal to children, but if you believe the general opinions on the net, this box is more suitable for children from 4-5 years. 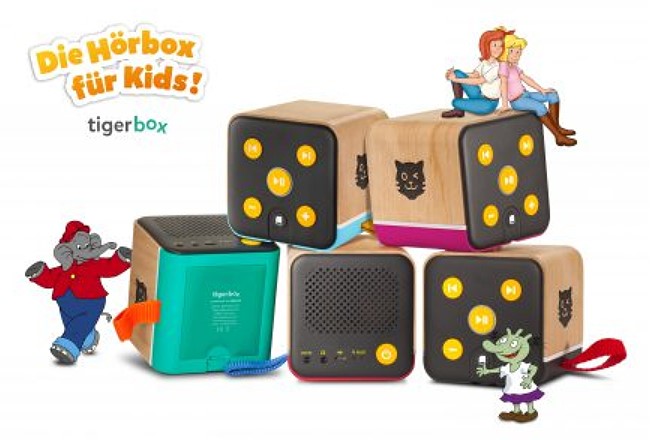 The Tigerbox is available at a price of €30.00 including 3 audio plays and a 4-week access to the Tiger Tones app, through which 1,000 audio plays / audio books or music can be streamed for free, and thus stands out clearly compared to the Toniebox.

In addition to the price, the Tigerbox also has the advantage that the box offers the option of recording your own content onto a standard micro SD card or using the device as a USB speaker for your own cell phone or tablet. The Tigerbox is also in no way inferior to the Toniebox in terms of stability and robustness. The battery life of up to 8 hours is slightly longer than that of the Toniebox.

Compared to the Toniebox, which thanks to the Tonies comes with many great figures that can actually spark a passion for collecting and invites you to creatively replay the stories, the Tigerbox comes across as somewhat sober. The option of making the gift search easier for family members by contributing new Tonies is also omitted here. If a streaming subscription is concluded via the Tigertunes app (not a must), additional costs are incurred, and at the same time, the use of the streaming content is only possible with Wi-Fi reception. The Toniebox is also somewhat easier to use, especially for smaller children.

Overall, the Tigerbox can definitely keep up with its well-known competitor. Anyone who wants to give children the opportunity to literally hold their favorite characters in their hands at the same time as the stories, in order to promote their visual and haptic perception, is well served by a Toniebox. On the other hand, anyone who does not value the corresponding figures, wants to save on acquisition costs, be even more flexible in the design of the playable content or use the streaming service of the Tigerbox, should go for the Tigerbox. Each system has its advantages and disadvantages, which have to be weighed individually.